One week on from my half marathon and time for race number two. This weeks race was at Sandown race track and was part of the 2012 running show. Around 400 folk turned out for the race on second day of the event. After the horrendous weather that we have been experiencing of late, it was nice to awake to clear blue skies.

The show opened at 9:30 with the race start at 10:30. I attended the show with friend and running buddy Brian (@bsmithy100).We arrived in good time and had a relaxed time pre-race collecting race numbers and goody bags and a sit down before leaving the warm building and venturing out to the start line. Despite the sun shining the morning was quite cold a very windy.

Now in my head when I think of a racecourse I think...Flat! But the course which took us around the track, surrounding grounds and stables was anything but flat, and surprisingly undulating. We found ourselves at the front of the pack at the start and typical of me I flew out the traps way too fast with the first two miles at 7:23 and 7:01 minute/mile pacing. In fact all my mile laps were sub 8 bar one. I knew I needed these kind of laps to achieve my PB.

The toughest part of the course was in fact a long straight on the tarmac at the bottom of the race track. It meant running along one way with the wind and then loop round and back again with the strong wind against you and the low Winter sun in your eyes.

After the disappointment of missing out on a PB last week it was great to bounce back with one today.

Once changed we had the running show to look forward to. Before we walked round we enjoyed a nice cup of tea and good chat with Twitter friend Lesley (@lilbeeloo67) who was at the show with her husband.

The event was brilliant this year, we chatted to some great people and was looked after throughout the day. Highlights were the informative chats given to us by Compressport and Cherryactive

So I finally got my racing shoes on again, this time for a trail half marathon. The race was the dirt half challenge in Leighton Buzzard. I quite fancied something a little way from home and in new running surroundings. As it turns out, half the course is on the canal towpath of which I spend a good portion of my training on back home on the Basingstoke Canal. The rest of the course was great though with some good interesting woodland trails with testing undulations, tree roots and muddy terrain underfoot. The route was fantastic along with the organisation, but it was a bad day at the races for me.

I'm probably being a bit hard on myself because I went into this race believing I could bag a PB...I was a minute off! My previous PB though was at a road race so I guess I should not expect to be as quick on the trails.
The first half of the race is quick. I managed to get towards the front and although the route picks up the narrow canal towpath soon into the race the pace was quick at the front. Actually for me the pace was too quick as I clocked up the first three miles with 7:15 minute mile pacing. I stopped briefly at the first water stop to take a gel early to fuel me later in the race. I slowed a little for the next few miles but kept a good pace going on the flat terrain. The towpath is well maintained and consists of a narrow tarmac path with grass verges either side to allow for overtaking.


The second half of the race was more demanding as we headed into the countryside. The terrain changes to muddy paths and woodland trails and gets more undulating. There is also a steep hill to get up. It was this hill that cost me. I hate when I'm forced to walk in races or even in training but that was  what i had to do today. My thighs were burning, I'd set out too fast and now I had thrown the towel in. I managed to run part the hill but lost a couple of minutes, it was then I thought 'sod it' I'm just going to slow down and enjoy the rest of the race. The next stage of the race was great, some quite technical trails with fast down hills and tree roots to mastermind and the route continued to be undulating. There were also muddy fields to run through which continued to sap the energy of my legs.
The route then picks up the canal towpath again for the last couple of miles. I got chatting to a fellow runner which was great to distract from the tiredness as we exchanged stories and times of previous races. Nearing the end I asked her what the timing was (my endomondo app on the phone shut down after the first few miles) We were at 1:43:00 with a quarter of a mile to go. With this news I instantly sprinted off with my PB of 1:44:50 still an outside shot. I fell short by a minute and my fellow runner deservedly sprinted past me to the finish. I congratulated her for a great finish (Grrrr!) collected my medal and headed straight to the fine spread of cakes that had been laid on by the organisers.

Rather than beating myself up about missing out on the PB, I tried to constructively learn from the experience.

l  I had not given the course enough respect.


l  I had not done enough hill work recently ( Something I used to spend a lot of time on.)


l  I need to work on strengthening my quads and core, both of which felt weak and were tested on the trails today.


I've not had a bad race before. Every race I've run I continue to improve on my times but for the first time I haven't. From that point of view its been a great race as I've learnt a lot about myself.


I will definitely be back next year, the organisation, facilities and race staff were great. The course was great and so to was that table of cakes waiting at the finish line!

Two races in one week 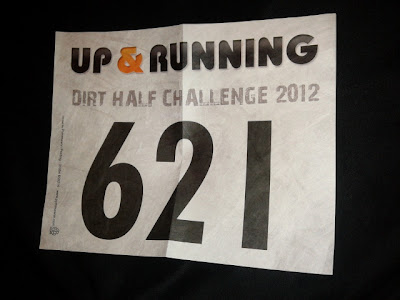 I have not entered a race since the London marathon earlier this year, unless you include a parkrun, but there is no shiny bling to collect when you've finished so that's not a race!

Unbelievably London is now seven months in the distant past, so it was about time that I had something new to focus on. I didn't want the training intensity that comes with a full marathon so opted for a half marathon, or as they say across the pond a 'half mary'.

Without thinking I went straight for a trail race, which in hindsight is probably not the best option if, like me you are looking for a course to bag a PB. The race I've entered is the Dirt Half Challenge in Leighton Buzzard a mixture of canal path and woodland trails, and a rather nice spike in the middle.

Apart from hill, the course looks fairly downhill but with narrow canal paths I'm not sure what my chances are for a PB.

My PB to date is 1:44:51, which was pretty much 8 minute miling. My thinking was to match this but on the downhill sections try to get some sub 8 minute miles in and then grab a PB...Simple!

Training has been going well for this event, last week I managed to get my weekly total of miles up to 35. I've started doing a back to back run on a Tuesday which has helped bump up the miles. This consists of leaving my car 5 miles from work, then running to the office and then back to the car in the evening. I've also been trying to do a bit more speedwork on my shorter lunchtime runs.

Following on from this race the following Saturday I will be at the running show and taking part in the 10K race which is around the grounds of Sandown race track. I have not run a 10K for a few years now, so it it will be good to race at that distance again.

It's been really enjoyable training for the half marathon and takes some of the pressure of fitting in those long Sunday runs required for marathon training, but I definitely want to run another marathon next year and I am pencilling in the Loch Ness marathon. This one is on my 'to do list'.

So thats the next couple of blog post's sorted out...Race reports! Until then enjoy your running :-)
Posted by Unknown at 21:07 No comments: 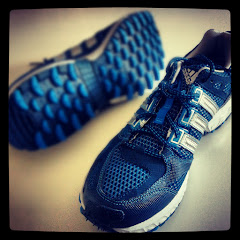